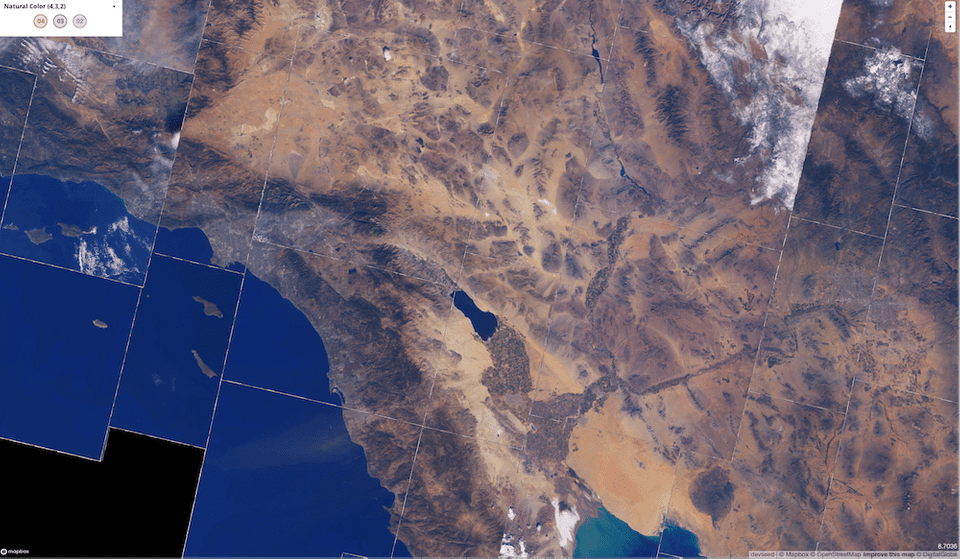 There's a new way to serve a raster basemap.

Historically, the barrier to entry of serving an image basemap was quite high. You had have access to high quality satellite imagery, the compute power to preprocess those images into the right format for the web, the storage capability to store all that data, and the server capability to handle spikes in traffic.

All that has changed.

With the advent of serverless computing, the Cloud-Optimized GeoTIFF (COG) format, and large public repositories of such data, serving map tiles from large collections of imagery is being democratized. It's now possible to serve tiles on demand from a collection of terabytes of imagery, quickly, cheaply, and easily.

In this post, I present an outline of this new ecosystem, and lay the groundwork for future blog posts where I put this theory into practice, and show how to implement these tools with existing, open data sets.

A Cloud Optimized GeoTIFF (COG) is a regular GeoTIFF file, aimed at being hosted on a HTTP file server, with an internal organization that enables more efficient workflows on the cloud. It does this by leveraging the ability of clients issuing ​HTTP GET range requests to ask for just the parts of a file they need.

This new format is at the core of dynamic tiling. By making use of its internal image overviews, one can read parts of the image over a network roughly in proportion to the amount of data requested. The client needs only to read the file's inital metadata to know the exact pattern and byte ranges of the rest of the file. Then to read an image's top-right corner at mid-resolution, a minimal number of additional requests can be made just for that data.

There are several large collections of publicly-available COG data, including:

NAIP, MODIS, and CBERS imagery is stored in requester-pays buckets, which means that the requester pays the cost of the GET request and the data transfer, but as we'll see in future blog posts, this is a small cost as long as the tiler is located in the same region as the data.

Additionally, high-resolution USGS elevation data is being converted to COG, with expected launch in 2020, and there are rumors that Sentinel 2 data may be available in COG in the future.

It's great that all those terabytes of COG exist for public consumption, but you still need a way to select what portions of imagery to combine. That's where MosaicJSON comes in. It's a file that determines what source files should be merged to create each web mercator map tile.

Serverless computing is the last part of the puzzle. With services like AWS Lambda, one can set up dynamic tiling for a hobby project, and never have to manage servers. AWS Lambda will scale up and down with demand. If your project generally receives little traffic, but once in a while goes viral, you pay very little when you have no visitors, but are still able to scale quickly to whatever level is necessary.

To be clear, going serverless is not a necessary part of the puzzle. If you plan to serve map tiles at scale, it may be more performant or cheaper to maintain your own servers, but the maintainance overhead needs to be taken into account.

At this stage, I plan to use dynamic tiling for hobby projects, and not having to manage servers is a big plus.

While serverless computing is sometimes more expensive than running and maintaining a server, serving tiles is still cheaper than some paid services. A rough cost estimate for on-demand tiling of Landsat 8 data is $50 per million tiles. As a comparison, once (if) you surpass Mapbox's (very generous) free tier, their pricing is $0.25 per 1000 requests, or $250 per million. Furthermore, I aggressively cache my Lambda responses with Cloudflare to minimize the requests that reach the origin.

But overall, part of the allure of dynamic tiling is the flexibility from being able to choose any imagery on demand. You aren't restricted to what Mapbox selects for their satellite basemap.

Over the last few months, and along with Vincent Sarago and Jeff Albrecht, I've been helping to build out an ecosystem of open source tools to make dynamic tiling fast and reliable.

There are several interrelated tools. It's easy to get them confused.

Here's an overview of the ecosystem.

rio-tiler is at the core of the ecosystem. It's a library whose main purpose is to create a mercator tile from a given input image. In contrast to some of the following libraries, it takes a single input path and returns a single output image. It forms the core of some other libraries.

With the "standard" tiler, you provide a path to a COG image and a standard xyz mercator tile, and it returns data for that mercator tile. Specifically, it returns two objects, data and mask, which allow you to ascertain what portions of the mercator tile are not covered by the source image. rio-tiler also includes some "mission-specific" tilers for Landsat 8, Sentinel 1 and 2, and CBERS. These allow you to pass an identifier to a satellite scene, and the tiler will find the data corresponding to that scene on AWS S3.

September 2020 update: With the upcoming rio-tiler v2.0 release, mission-specific tilers have been refactored into a separate module, rio-tiler-pds.

rio-tiler-mosaic builds upon rio-tiler to work with multiple assets. It takes a list of assets that are already known to overlap with the tile, and combines them into an image aligned with a web mercator tile.

rio-tiler-mosaic takes a tiler from rio-tiler as an argument. This forms a simple plugin system, making it simple to create an image tile from either the standard tiler or a mission-specific tiler, such as the Landsat 8 tiler.

September 2020 update: With the upcoming rio-tiler v2.0 release, rio-tiler-mosaic is merged into the main rio-tiler repository.

cogeo-mosaic is a Python library to create MosaicJSON files and load such files from various backends. In the upcoming 3.0 release, new support exists for storing a MosaicJSON in a variety of locations, including in a DynamoDB table. For large mosaics, DynamoDB is significantly faster than loading a JSON file from an S3 bucket.

cogeo-mosaic-tiler wraps all of the above together. It's a python package and web server that depends on the above packages to serve tiled imagery on demand, and is designed to be deployed on AWS Lambda.

For example, the image endpoint essentially just loads a given MosaicJSON using cogeo-mosaic, using it to find asset identifiers for a specific mercator tile. Then it passes those assets to rio-tiler-mosaic using the standard tiler from rio-tiler. Those two packages then load each of the necessary assets, combining them into a single web mercator tile on the fly, returning it as an image to the user.

awspds-mosaic is a fork of cogeo-mosaic-tiler to support dynamic tiling of Landsat 8 data stored on AWS as a public data set. Landsat 8 imagery has some custom needs because data are stored in individual bands that need to be combined into a single image.

rio-cogeo is a library to facilitate creating COGs. It's rare that I use it because I'm generally tiling COGs that already exist publicly on S3, and thus I don't need to create new COGs.