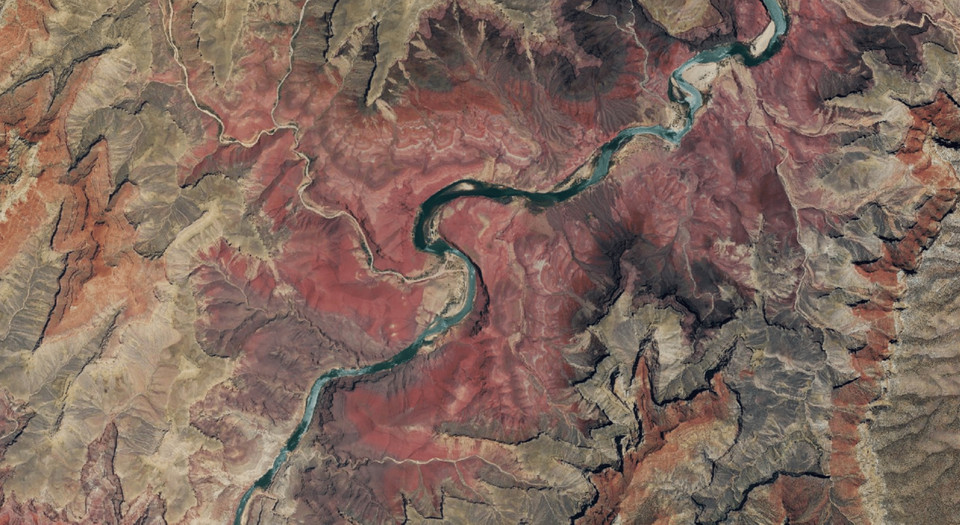 60cm-resolution imagery of the Grand Canyon from 2017. Click for an interactive example.

More and more public imagery sources are being provided in Cloud-Optimized GeoTIFF (COG), an efficient file format for fast random-access reads of geospatial raster data. This is revolutionary because the format enables new cloud-native workflows, such as serving imagery to a web map on demand, that were never before possible.

Within half a second, a server can grab and combine the relevant portions of half a dozen images, reproject into the coordinate reference system used in web mapping, and return it to the user. Making this process happen on demand can lead to huge reductions in cost—and zero fixed cost—as terabytes of map data no longer need to be stored pregenerated and stored.

This post builds upon a previous overview post to give more concrete details on working with the public NAIP collection on AWS S3, a repository of cloudless aerial imagery spanning the lower 48 U.S. states at up to 60-centimeter resolution. In the following sections I'll give an overview of the imagery available and best practices for optimal performance. For deployment instructions and other documentation, visit the project on Github.

The U.S. Department of Agriculture (USDA) oversees the National Agriculture Imagery Program (NAIP). Since 2003, this program has collected high-resolution aerial imagery of the continental U.S., with recent years photographed at 60-centimeter resolution. This data has been free to use for a while, but historically has been locked in cloud-unfriendly, closed-source formats.

However, thanks to the AWS Open Data program, NAIP imagery from 2011 to 2018 is available on a public S3 bucket in Cloud-Optimized GeoTIFF (COG) format. As I explained in a previous blog post, COGs democratize access to large collections of raster data by enabling fast random-access reads.

Given this large collection of data freely available in a cloud-friendly format, we can render map tiles from this imagery on demand with low latency, generally within 500ms. This on-demand rendering provides multiple benefits:

It's great that all those terabytes of COG exist for public consumption, but you still need a way to select what portions of imagery to combine. That's where MosaicJSON comes in. It's a file that determines what source files should be merged to create each web mercator map tile.

Dynamic tiling works by combining multiple source images into a single output image in the web mercator projection ready to send back to the client. This process requires quickly finding the source images that are necessary to combine for the desired tile.

In the NAIP case, the process of assembling a MosaicJSON is relatively simple as the source imagery is intentionally collected in such a way as to create a seamless mosaic per state. Images are produced in a regular grid with little overlap between source images, all imagery is cloudless, there exists minimal temporal variation (at least within a state), and the dataset is relatively static (updated yearly).

These factors make it considerably easier to work with mosaics for NAIP imagery than for satellite imagery, which has more overlap between scenes, large portions of missing or cloudy data, and high temporal variation.

The main thing to keep in mind when creating an NAIP mosaic is to avoid including multiple years of imagery in a single mosaic, which can slow down dynamic tiling. Most of naip-cogeo-mosaic is dedicated to working with the NAIP metadata to create a seamless, efficient mosaic. Consult its documentation for more information.

Cloud-Optimized GeoTIFF files include a number of internal overviews: lower-resolution, downsampled versions of the image, which are precomputed and stored with the image. Each overview level halves the height and width pixels, so each additional level reduces the resolution by a factor of 2. These overviews enable fast reads at a range of resolutions by minimizing the amount of bytes that need to be read.

NAIP imagery in the naip-visualization S3 bucket have full-resolution data plus 5 levels of overviews. This means that NAIP data can be read most efficiently at six zoom levels, in this case zooms 12-17. At zooms higher than 17, the images look pixelated. At zooms lower than 12, many images need to be combined and downsampled on the fly. To create an image for a single zoom 6 mercator tile, you'd need to read 4,096 times more data at level 12, then downsample.

In this case, to serve imagery for zooms 6-11 on the fly, I generate overview images that are themselves Cloud-Optimized GeoTIFFs, each of which contains 5 internal overview levels. Pregenerating overviews does lose some flexibility of COGs, as you need to choose how to combine imagery (your MosaicJSON) ahead of time rather than on demand.

The naip-cogeo-mosaic documentation has more information on how to use cogeo-mosaic to create these overviews.

I've spent a lot of time working on performance for dynamic tiling, with the goal of reducing latency to the point that it's viable for a wide range of applications.

With my current serverless solution hosted on AWS Lambda, I'm able to get around 500ms latency (longer for cold starts). In the following sections I'll outline the things you should keep in mind to keep performance as high as possible.

Since GDAL, the program underlying the dynamic tiling process, is synchronous, the largest amount of time is spent waiting on network requests to S3 for each portion of the image. Thus, one of the best ways to minimize total time is to minimize the number of images the tiler has to fetch to combine into a single web mercator tile.

As described above, this step is done ahead of time, while creating the MosaicJSON. The process of minimizing superfluous source assets is taken care of within naip-cogeo-mosaic when you make a mosaic.

Images used in web maps usually come in square images of either 256x256 pixels or 512x512 pixels (@2x resolution). Using @2x resolution tiles requires fewer requests to cover the screen, since each image covers a larger area at the same resolution, but each request takes longer. With @1x scale tiles, each tile is 1/4th the size, so you'll need (roughly) four times the requests.

With this project, my goal is to push per-tile latency as low as possible. Unsurprisingly, it takes significantly longer—my ballpark estimates are around 2 to 3 times longer—to generate a @2x scale image than a @1x scale image. Thus, serving @1x scale images is preferable when you prioritize speed, but server costs will be slightly higher since you need so many more requests.

The tiler works by

While these three steps work with any file format, Cloud-Optimized GeoTIFFs allow for huge speedups on the second part. The COG format is efficient because it allows for intelligent streaming of portions of an image, but because a COG is internally tiled, the tiling server will likely need several (small) GET requests for each source image. Thus, locating the compute in the same region as the data is absolutely essential for low total latency, as the latency for each S3 GET request is larger across regions, and this time gets multiplied by the number of requests per image, and the number of images needed to combine for one mercator tile.

Additionally, since NAIP imagery is stored in a Requester Pays S3 bucket, locating the server in the same region will be significantly cheaper as you won't need to pay egress charges on intermediate data transfer.

Use DynamoDB as the MosaicJSON backend

The MosaicJSON defines a mapping from mercator tiles to image urls. Since it must define this mapping for every mercator tile (at the minimum zoom, which for NAIP is zoom 12), the MosaicJSON file can get quite large. When saved as a JSON file, my United States-wide mosaics are 64MB. Since this mosaic is needed for every dynamic tiling request, storing this data in a JSON file on S3 requires the lambda function download and parse it on every request. This adds roughly 2.5s per request for such a large mosaic.

Luckily, there's an alternative to storing as JSON. cogeo-mosaic supports multiple backends, one of which is DynamoDB, a serverless, low-latency key-value store. This is ideal for storing mosaics because only one or sometimes two DynamoDB read requests are necessary per dynamic tiling request. This lowers the time spent on the MosaicJSON from 2.5s to around 20ms.

Often the NAIP imagery is visually a bit bland and benefits from increased saturation. While it's possible to do this server side, it increases image load times by 100-200ms. For WebGL-enabled map clients like Mapbox GL JS or deck.gl, client-side image saturation is easy and instantaneous, so this is better to do client side.

I'm a big fan of Cloudflare's free tier as a simple solution to both speed up my site and keep costs low by reducing the number of requests that reach my server. Some sort of caching is ideal.

A rough estimate of the cost with my serverless approach is $25 per million requests. Note that this is only for requests that reach Lambda; using Cloudflare with a long Cache-Control setting should make it effectively even cheaper.

This is a pretty good value. Once you surpass Mapbox's (generous) free tier, their satellite imagery costs $250/million requests. (Though that's not a direct apples-to-apples comparison, since you can request @2x tiles from Mapbox for apparently the same price.) But apart from being cheap, a great benefit of the dynamic tiling approach is that you can choose any combination of imagery you wish. It's just as easy to serve tiles from 2011 as it is from 2018.

That said, there are a few drawbacks to using NAIP imagery and reasons why tiled imagery from a commercial company such as Mapbox can often be better.

Since this project was designed for exploration and to be "good enough" for hobby mapping projects, these drawbacks are fine for my needs.

If you appreciate this data, talk to your elected officials. According to Wikipedia, USDA is considering removing NAIP imagery from the public domain in the near future.

Thanks to Vincent Sarago, Jeff Albrecht, and many others for their invaluable feedback and work pushing the Cloud-Optimized GeoTIFF ecosystem forward.